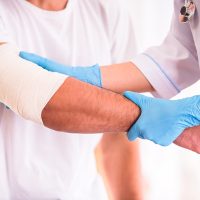 Workers’ compensation laws sometimes seem like they’re written in another language. We’ve defined the most commonly used workers’ comp and insurance terms to help you navigate during your claim.

If you have suffered from a personal injury at work, contact Franco Law Firm for representation and to receive the benefits you deserve!

A calculation of an injured worker’s average daily earnings. This is often used to determine entitlement to wage loss benefits following an injury.

A physician who both parties ‘agree’ to perform an Independent Medical Evaluation.

A national physician’s group that publishes a set of guidelines called “Guides to the Evaluation of Permanent Impairment.” These are practical guides for rating permanent impairment after an injury has reached maximum medical improvement (MMI).

A federal law that prohibits discrimination against people with disabilities.

Arising Out of Employment/in the Course of Employment). An injury or illness must be AOE/COE to be covered by workers’ compensation.

A group of commissioners who review and reconsider decisions of workers’ compensation administrative law judges.

Application for Adjudication of a Claim

A form the employer files to open a case at the local Workers’ Compensation Appeals Board (WCAB) office if there is a disagreement with the insurance company about the claim.

A way to determine how much permanent disability is due to a worker’s work injury and how much is due to other disabilities.

If the parties can’t agree on a claim, they can ask for a BRC. These vary by state but typically involve an informal mediation conference administered by a neutral hearing officer.

Defines what injured workers are entitled to when they sustain an injury “arising out of and in the course of” their employment.

Carve-out programs allow employers and unions to create their own alternatives for workers’ compensation benefit delivery and dispute resolution under a collective bargaining agreement.

An individual who settles a claim filed by an insured for their employer. The adjuster evaluates the merits of a claim and determines the proceeds that might be payable for the claim.

Assigned to specific classes of work types (like construction or custodian). These codes describe the work being insured and the premium collected for that insurance, so an insurer needs to assign the correct classification code to the work being done.

An order by a workers’ compensation judge for a lump sum payment of a permanent disability award.

A type of settlement where the worker receives a lump sum payment including permanent disability amount and the estimated future medical care costs. A workers’ compensation judge must approve a settlement like this.

An injury caused by repeated events or repeated exposures at work. For example, injuring a wrist while doing the same motion repeatedly or losing hearing due to constant loud noise.

Declaration Of Readiness (DOR or DR)

A form used to request a hearing before a workers’ compensation judge when the participant is ready to resolve a dispute.

The party (often the company or insurance company) opposing an applicant in a dispute over benefits or services.

An employee of the state workers’ compensation department who rates an injured worker’s permanent disability after reviewing medical reports or medical-legal reports describing the worker’s condition. The disability rating determines the amount of compensation.

A private communication with a judge regarding a disputed matter without the other party being present or copied with correspondence.

“Ex parte” is a Latin phrase meaning “on one side only; by or for one party.”

Any order, decision, or award made by a workers’ compensation judge that hasn’t been appealed in a timely way.

A written decision by a workers’ compensation judge about a case, including payments and future care that must be provided. The F&A becomes a final order unless appealed.

A report that an employer must file with its workers’ compensation carrier when one of its employees is injured while working.

A medical assessment that quantifies a claimant’s physical disability may refer to the whole body or a single body part. The rating is determined by medical examinations using American Medical Association (ADA) guidelines. Individual states may have additional policies that supersede the ADA guidelines.

An injured worker not represented by an attorney.

The term “pro per” is an abbreviation of the Latin phrase “in propria persona,” meaning “in their own person,” and it refers to a situation where a litigant represents themselves without a lawyer.

An examination of an injured worker by a physician selected by the adjuster. Medical Examinations are usually done to determine the appropriateness of a course of treatment or to provide an evaluation of permanent impairment.

A report that lists the losses and expenses for the claims filed on a policy for a given period. It also provides a breakdown of losses by paid, reserves, and subrogation. Only costs charged to a claim are listed on the loss run.

An amount representing the losses paid plus the change (positive or negative) in outstanding loss reserves within a given period.

A claim in which a doctor determines an injured worker to be unable to work. These claims involve the payment of disability benefits, medical costs, and other expenses.

The maximum level of medical improvement of an injured worker’s condition. Once a claimant has obtained MMI, it is expected that significant improvements in the future will be minimal.

A claim that includes payments for medical expenses only. This occurs when the injured worker was not out of work long enough to receive compensation for lost wages.

Suppose the treating physician reports that the injured worker will never be able to return to the same job duties that they had when they were injured. In that case, the employer can offer the injured worker a modified job instead of vocational rehabilitation benefits. It must last at least 12 months and pay the same wages and benefits as the job at the time of the injury.

A fine charged to an employer or claims administrator and paid to the injured worker. It can refer to an automatic 10% penalty for a delay in one payment or a substantial penalty for unreasonable delays in one or more payments.

A medical report by a treating physician describing the injured worker’s medical condition once it has stabilized.

An injured worker whose injuries have rendered him permanently unable to perform the kind of work for which he is qualified and who cannot perform other reasonably available work. In most cases, benefits for PTD are paid for the remainder of the injured worker’s life.

A petition filed when an employee’s injury is caused by the employer’s serious and willful misconduct.

An organization that processes claims on an employer’s behalf.

The process used by insurance companies to decide whether to authorize and pay for treatment recommended by a treating physician or another doctor.

Insurance coverage for employees required by law in case of injury or death due to an occupational accident, regardless of the employer’s negligence.

Typically two-thirds of the employee’s AWW. The WC rate is often used to calculate an injured employee’s temporary or permanent benefits.

Termination of an employee in retaliation for filing a workers’ comp claim. An employee who believes his employer violated these laws may file a claim.

If you have suffered from a personal injury at work, connecting with a caring personal injury attorney is the best thing you can do. Contact Franco Law Firm for representation, guidance, and to receive the benefits you deserve! Call today at (813) 872-0929 and schedule a free consultation so your case can have the best possible outcome.

Do you have specific questions about worker’s compensation for under-the-table workers? Read our blog post here to learn more.