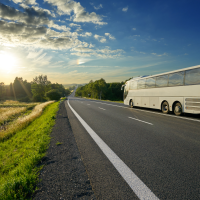 Snow had been falling in flurries of several inches during March of 1990 in Scranton, Pennsylvania. It was cloudy on the day of the accident. When the collision happened, Gloria Estefan was touring with her band, her husband, Emilio, and their then 9-year old son. A tractor-trailer on the road jackknifed, causing congestion and traffic to pile up. As her tour bus slowed to a stop, another tractor-trailer rear-ended them. The people on the tour bus said the impact felt “like an explosion.”

Florida has an average of 1,101 crashes every day. While we don’t have to worry about snow or black ice, we certainly have our own environmental hazards like heavy rain, winds, and road debris from thunderstorms. Whenever and wherever you drive your car, there are risks. If you are not at fault for those risks, if those risks were avoidable, and someone else is responsible for them—you may be entitled to compensation. At Franco Law Firm, we handle cases like Gloria’s constantly.

When her bus was rear-ended, Gloria remembers saying, “Babe, I broke my back.” When asked about her first memories after the crash, she says she remembers trying to move but finding the pain was too excruciating. The only way she could describe the pain was “the taste of electricity in my mouth.” Car accidents can be horrifying, especially when your children are involved. The event could have easily paralyzed her, and she did have to undergo surgery. Gloria had to learn to walk again. She experienced numbness and weakness in her feet and ankles, which impacted her ability to work.

The tour she was on had to be canceled. Gloria had to return to her home in Miami, Florida, and take an entire year to heal properly. This accident physically and emotionally traumatized her, so Gloria went to court. She filed a lawsuit against Maersk Inc. because it was their truck that had crashed into the bus. They settled with her for nearly $9 million, and another company, Naro Enterprises Inc., settled with Maersk Inc. for a reimbursement of $4 million because it was their truck that caused the traffic to back up in the first place.

Even getting rear-ended, which seems like a very straightforward defendant and plaintiff relationship, can be more complicated than you’d think. If you are ever in an auto accident, the first thing you should do is get medical attention (if needed). The second thing you should do is dial up a personal injury lawyer! We can help win reimbursement if you are entitled to it.

Gloria did precisely that, and she got a happy ending. Beyond being reimbursed for her injuries and the more minor injuries experienced by her family and her touring entourage, she turned this traumatic event into an opportunity to give back. Gloria has since returned to Northeastern Pennsylvania repeatedly, contributing thousands of dollars to the local firefighters and Ronald McDonald House. Both places sprang to her aid when the accident occurred. After the incident, she wrote two songs that brought even more success to this already distinguished singer/songwriter: “Into The Light” and “Coming Out of The Dark.”

As we mentioned, claims can become more complicated than you’d think. Injuries can appear or worsen the days or weeks that follow an accident, so it is vital to have a quality attorney on your side. Rest assured Franco Law Firm attorneys are well versed in Personal Injury and will be by your side to fight for you and win your case. To learn more and to book a consultation, please call us at (813) 872-0929 for a free consultation. Stay safe out there!